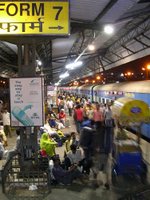 This week, is an interesting week. Id in on the middle of the week. So, mid-week holiday, will naturally propel some delite's to take a hike from the city.

Some of my neighbours, have already left. One for Katara and another for long away Guwahati and some are preparing to leave. The holiday season has started in right earnest. My travels with in the city has shown lesser traffic on the roads and more at airports and railway station.

Where does all this leave me. That would be an easy guess. I am in my flat, looking at and my thoughts surround me. Isn't is a fair game, that, if a reasonable chunk leave Delhi, then in the cool days of October-November, the city itself is greasy enough to be a holiday destination for its own residents. And also a host to a gamut of people, who descend on the city, for being capital of the country.

There are three things to do in this week

1. Take a long walk - The walk to explore the city you have always found a excuse not to undertake, should be done this week. The timing is good and so also the climate and great food is all around. Don't resist the temptation this time.

2. Forego alcohol (for a week) - I am not saying this, so that you become a teetotaller. But, only that, you can say to yourself that you can do without your daily dose and still live that great dream.

3. Give a thought - Every delite has problem which he been putting off for a long time. Let this week serve you to accommodate that problem and explore the road ahead. This can only happen if you think that there is solution to that problem and understand that; you have to give some to get some.

I suggest you ponder and point out to me whether the weekend which is coming was as amusing, was it was planned or not. I will let you know my trivialities. Adieu.