Which is Better: Dengue or peeing on a wall 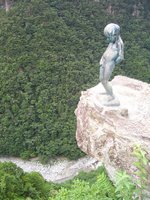 Dengue, an epidemic threatening to explode, has claimed many a Delhites. Though it is still claiming lives as I write this, but the impending winter will take care of the dengue treat. After all dengue is a seasonal problem.

Think of urination in public. This call of nature has caught the attention of media and citizens alike. Media is worried, what image New would project to the world when it comes visiting in 2010 during the Commonwealth games. To the ordinary man on the streets, 2010 is still a few year's away.

In fact our uncontrolled behaviour to urinate at public places is being blamed as one of the causes of dengue. Public apathy to such acts has a role to play and also the casual attitude of the municipal corporations is not helping. But with mainstream media on the job, you can expect some results.

Next time you pee on a wall, think twice. Because, if you get dengue, you know whom to blame.