Marriages made in heaven 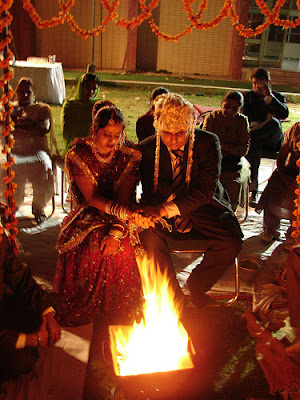 With marriage season in progress, couples are being solemnized by their thousands.
What is astonishing is the numbers of marriages.Do a simple maths, roughly add the number of marriages per day in the marriage season. For example, say 5000 marriages are taking place each day of the marriage season, which lasts 30 days, then at the end of this period, we get 1,50,000 marriages and 3,00,000(3 lakh) (man + wife) people getting married. The population of Delhi is around 13.8 million (1.38 crore people). Roughly the marriageable couple form around 10-20 percent of any population , so the approximately 13 lakh people are in the marriageable age. If 3 lakh people on an average get married every marriage season, Delhi should have been devoid of marriageable population by now. But that hasn't happened. The reason are any body to guess. What is astonishing is that, in spite of thousands of marriages taking place in Delhi, I have not been invited to any marriage this season, this has caused me to doubt the authenticity of the figures.(No you know why!)
picture courtesy :[amritworld]

Shailendra said…
i have never seen a couple getting married by sitting on chairs.
Isn't it strange.
Usually couple sits on ground
I am right